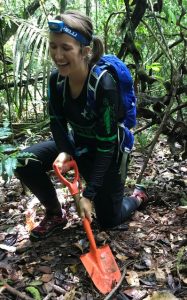 Leaf-cutter ants maintain an ancient and obligate mutualism with a fungal cultivar by feeding the fungus freshly-cut leaf substrate. In return, the fungus garden degrades the leaves and provides sustenance for the entire colony of ants. While dominated by the mutualistic fungus Leucoagaricus gongylophorus, the fungus garden is not a monoculture; sequencing and culturing studies have identified a consistent bacterial community that resides within the garden, as well as other fungi that associate with the system. However, the presence of viruses has not been investigated within the leaf-cutter ant-microbe symbiosis. Along with the Goldberg Lab at UW-Madison, this work will attempt to uncover viral players within the system, specifically investigating viral presence as ants age.

Kathleen Thompson (Botany): Effects of nitrogen source, light, and soil moisture on the colonization of ecto- and arbuscular mycorrhizal fungi in the roots of duallycolonized Populus deltoides 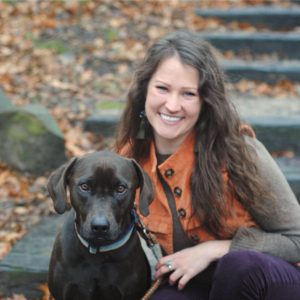 More than 90% of all land plant species form symbiotic relationships with mycorrhizal fungi. Most tree species associate exclusively with members from a single mycorrhizal guild; however, eastern cottonwoods (Populus deltoides) have the unique ability to associate with both arbuscular and ectomycorrhizal fungi concurrently. Factors influencing the degree to which “dually-colonized” individuals are inhabited with one mycorrhizal guild versus the other are poorly understood. This study aims to determine potential abiotic factors that influence the degree to which P. deltoidesassociates with arbuscular and/or ectomycorrhizal fungi as well as how these factors influence mycorrhizal community composition and diversity. Determining what influences mycorrhizal colonization in dually-colonized tree species may elucidate important factors dictating the current ranges and geographic distributions of other tree species. Furthermore, understanding the major factors controlling the current compositional structure of our forests will be crucial for predicting how they might respond to proposed climatic changes and how conservation management and restoration tools might be best applied. 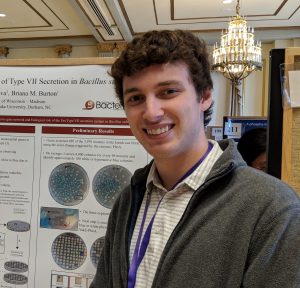 Cooperation and competition within bacterial communities is critical, yet our understanding of most communities is limited to which organisms are present. Understanding how an individual bacterium senses, analyzes, and reacts to its environment starts with understanding what is on the cell surface. As one of the dominant members of soil microbial communities, Bacilliprovide an excellent system to study the intersection of soil communities and molecular level sensing and responding. Bacteria have a diverse range of protein secretion systems used for responding to and shaping their environment, including the Type VII secretion system (T7SS). The T7SS has been shown to secrete a limited range of fully folded, dimeric proteins, including the only known secretion substrate in Bacillus subtilis, YukE. The biological role of the B. subtilisT7SS is still elusive, but the T7SS is known to be important for interbacterial competition in other bacteria. Therefore, I hypothesize that the T7SS is an excellent candidate for mediating soil organism interactions.

To determine which of the less domesticated Bacillussoil derivatives are useful systems to study the T7SS, I will test the ability of several Bacillus species to secrete their respective YukE orthologs. I will use a standard secretion assay to detect presence of YukE orthologs using a custom polyclonal antiserum targeting YukE.1,2I have strong reason to believe that the YukE antibody will recognize the YukE orthologs because the antibody was raised against full-length B. subtilis YukE, and the orthologs have nearly perfect sequence identity. My results will indicate which Bacillusspecies secrete their respective YukE ortholog.

My second aim will determine additional T7SS substrates secreted by other Bacillusspecies. YukE belongs to the LXG or WXG-100 class of secretion substrates. Of several predicted WXG-100 proteins encoded by Bacilli, YukE is the only one identified thus far to be secreted by B. subtilis. Using mass spectrometry to compare wild type and secretion-deficient strains, I will determine if other LXG or WXG proteins are secreted in these organisms. If the Bacillusspecies T7SS secretes more than the YukE ortholog, then I can begin to investigate the major differences between the domesticated B. subtilislaboratory strains and the undomesticated Bacillusspecies.

Together these aims will explore the function of the T7SS in members of the Bacillus genus, identify proteins secreted by the T7SS in those members, and help elucidate a biological role for the T7SS. These results will provide a first step into exploration of the potential involvement of the T7SS in interbacterial interactions in soil communities. 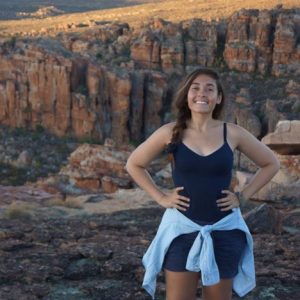 Tropical regions are experiencing fast rates of land cover change due to the abandonment of crops and pasture affecting soil carbon stocks in unpredictable ways. Many studies have reported an increase, decrease, or no change in soil carbon with reforestation. Previous researches have mostly focus on plant community composition, soil physicochemical properties, and bacterial communities. However, there is limited information about how fungal communities change with forest succession in tropical systems. The objectives of this work are to study how forest succession from pastures influences fungal communities across different soil orders, and how fungal functional groups can control soil organic matter accumulation. The study will be conducted using a successional chronosequence approach at three different soil order classification (Oxisols, Alfisols, Mollisols) in Puerto Rico. I will measure fungal communities and functional groups (specifically mycorrhizal and saprotrophic fungi) through a DNA sequencing approach. I will also do microscopical analysis to measure mycorrhizal colonization in roots and spore abundance in soil. In addition, I measure soils for carbon and nitrogen. By understanding how fungal communities are affected by forest succession under different soil conditions, we will improve our understanding of soil carbon dynamics in disturbed tropical ecosystems.

Approximately 30 million kg of pesticides are applied to lawns and gardens, accounting for more than 11% of total U.S. pesticide usage. The herbicide 2,4-dichlorophenoxyacetic acid (2,4-D) is among the most commonly used pesticides on urban landscapes in the U.S. Although 2,4-D fate and breakdown has been well documented, interactions with the entire soil microbiome and simultaneous assessments of its transformation products (TPs) in urban soil remains poorly understood. Microorganisms, namely bacteria, are the primary drivers of pesticide transformation in the soil. Seasonal environmental variations are key factors that directly influence soil bacterial community structure and function, which may alter pesticide degradation networks resulting in the formation of TPs more toxic than the parent compound. Recently, 2,4-D-degrading genes have also been identified in soil bacteria and serve as good reporter genes for 2,4-D biodegradation activity. Of special interest is the tfdA gene, which is classified into three classes (I, II, and III) and initializes the catabolic pathway for 2,4-D biodegradation. We propose to evaluate the impact of seasonal environmental variation on pesticide-degrading activity of soil bacteria and assess the formation of 2,4-D TPs. To accomplish this, alterations of the general soil bacterial community structure and pesticide-degrading activity will be assessed using the Illumina Mi-Seq high-throughput sequencing analysis. Further, the use of ddPCR as an alternative to qPCR will be validated to quantify the tfdA gene classes and correlate their detection with the formation of 2,4-D TPs. 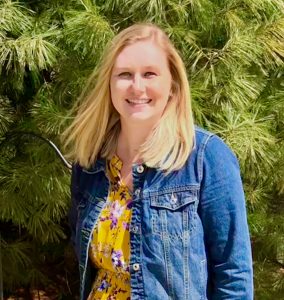